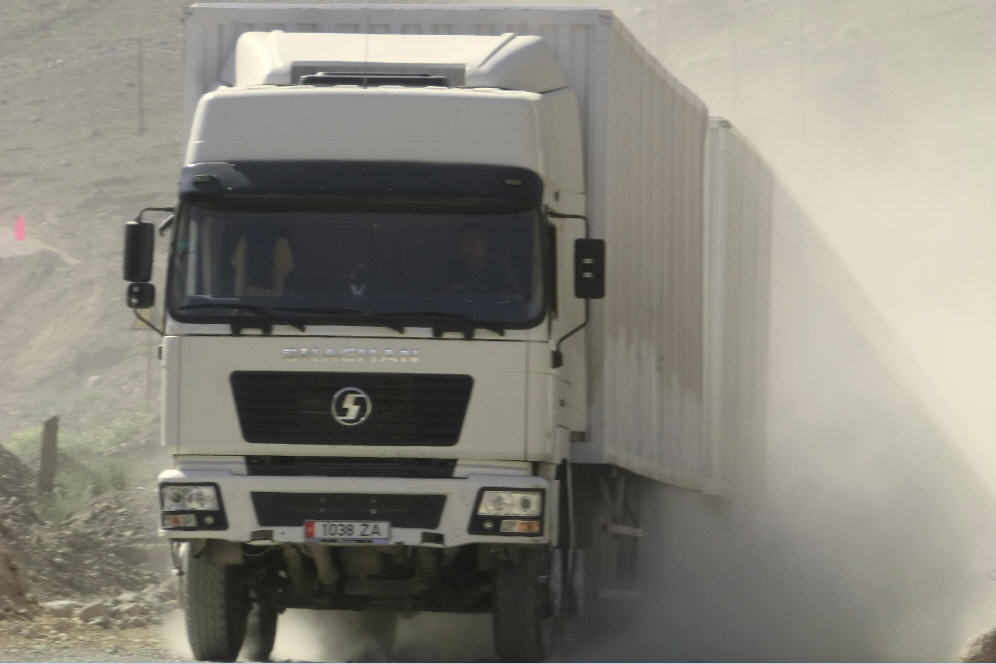 The last 2 – 3 weeks in China have been really challenging, both physical and mental. Traveling from Dunhuang to the Chinese border had little ups and a lot of downs. Even the two rest days in Kashgar were not what I expected.

After 140km dust, high temperatures and a busy road we arrived in Duhuang. A great city, nice places to hang out and some really good places to get dinner. I’m surprised that the streets are clean, there are many trees, oleander’s and other plants and that most houses are maintained. On our rest day we took a 5AM taxi to the sand dunes, just 6 km out of the city, to see the sun rise. It’s a great way of making money! Just put a gate and ticket office in front of the dunes, charge 120 Yuan (10 euro) and then you can climb the dunes yourself. If you have more money to spend, you can take a camel ride up the dunes. We walked up the dune, of course. The view was spectacular! So was the color of the sand and the patterns the shade caused. I used the afternoon to do my laundry, bike maintenance, walking around to find a milk shake and getting some good kebab for dinner! After the long days on the G30 and G312 highway, it was great to be away from dirty trucks and empty land. But that was only one day. The highway continued and the next 22 days were difficult. There were 18 cycling days, completing almost 2.500 km with an average of 140 km / day, and the four days before arriving in Kashgar: 1 x 160km + 2 x 170km + 1 x 125km. The distance itself wasn’t the problem, but in combination with the many dirty trucks passing by, the lack of villages or anything to see and stop, made it difficult. According to our tour leader, there were no other roads (which I find hard to believe) so it was all highway and highway. Hard head winds with sand or rain made it almost impossible to climb mountains. And mountain winds can be surprisingly hard and they always push you backwards. Making to days difficult as well was the camping. Or actually the camp sites: grave yards, dump yards, poop and truck stops, stone fields and desert areas. All with no shade at all! One rider got a serious heat stroke and was not able to ride for about a week. It was almost impossible to get his temperature under control. In addition, most camps were just next to the highway, causing bad nights due to the noise. Without a good night sleep, the cycling days are difficult. The route has not been explored, so many camps were last minute ‘solutions’. Since there is no real plan and things are unknown all effort is going into logistics rather than taking care of customers.

There are many things well organized by the Tour d’Afrique, but customer satisfaction was really low these three weeks. Many riders, including me, feel that there is no effort made to make the tour enjoyable. It’s like pushing everyone from A to B and that’s it. When issues were raised I did not get the impression that they were taken serious: “that’s the way it is” and “there is no other possibility”. Chairs have been broken for more than 5 weeks and they are still not replaced. Camp sites are still close to the highway with no shade; when taking a walk after dinner, I frequently see better camp sites options. And trust me, I don’t mind cycle a bit further it that means a nice camp site. Breakfast is always the same, oatmeal, and some people already making their own. To me, it seems that profit and the time schedule is more important than making clients happy. As a fellow rider says: price/quality ratio is the reason why I am not extending my tour. And from that perspective, I agree and would not recommend Tour d’Afrique.

I got up early on the day we cycled to Kashgar so I would have more time ‘resting’. The 125 km went well and I arrived at the hotel at a little before 13:00 hours. After taken a really nice shower (remember: no showers in camp, only a water bottle and baby wipes) I met with John, Candice and Ingrid to take a taxi to the animal market, just a few kilometers out of town. Many cows, goats and sheep were traded over there. Although this is China, it felt very much the same as the farmers animal market in ‘Zuidlaren’ which I visit when I was a kid.

After two hours or so, John left to find a bike shop and the three of us went to the big Kashgar bazar. Everything you need you can find there! Lots of clothes, kitchen stuff, curtains, all sorts of food, drinks and spices, air conditioners and even building materials. There was this place where we had noodles, some kind of stuffed bread and of course some tea. After another walk around I had a special yoghurt drink: from a huge ice block, they scrapped some ice, added yoghurt and syrup, and mixed it in a bowl by throwing it in the air! Really delicious!

However, since the water probably wasn’t boiled, I needed the bathroom in the middle of the night to get rid of everything in my stomach and intestate.  The good thing about it was that I just needed one bathroom stop so I was able to sleep a little bit the rest of the night. But it kept me in bed for the whole next day as well. Pascal and Candice brought me some drinks and biscuits, and I heard that there were 7 other riders sick as well. The only common place where we all have been together was John’s café next to the hotel. Anyway, I needed the whole second rest day to do my thing: buying a new water bottle, doing laundry, cleaning my bicycle, changing money, buying a new power bank for my bicycle computer and get a haircut. And all of that with no energy in my body at all. It was a tough day.

There were three days from Kashgar to the Chinese border. Long days. For me it’s a very strange feeling to feel ok but have absolutely no energy in my body. Although the diarrhea was gone, I found it very difficult to eat something. I just wasn’t hungry. The first day after Kashgar was one with lots of climbing. Strong head winds even after a corner and a hot afternoon sun didn’t make it easy. I arrived at camp just before dinner. Camp was again close to the road and due to construction work there were trucks passing all night. I did get some sleep and the next day I felt better although low on energy.

Crossing the border was something special. For one, we needed to get the exit stamp in the last city before the border. Bags needed to go through an X-Ray, which was weird because we had another whole day traveling before leaving the country. Of course the fireworks I had in my hotel bag set of an alarm. There was some discussion and I should have notified the head of customs before checking out, but when I told it was for my birthday it seemed to be ok. When arriving at the border, it took more time then entering the country. The ‘exit’ procedure changed all the time: go through immigration one by one, then collect all passports for an exit stamp, after everything was written down and ok, we had to cycle in a group through no-one’s land and get our passport back at the last check point, but then we had to collect our passport by an official and could leave one by one, the second check point just waved friendly and no additional check was carried out. And even in no-one’s land the Chinese are building a new highway. Trucks and dust all over.

I am so happy to leave China! The people are great! The pollution, the trucks, the dust and long highways I can miss. I’m looking forward to Kyrgyzstan!